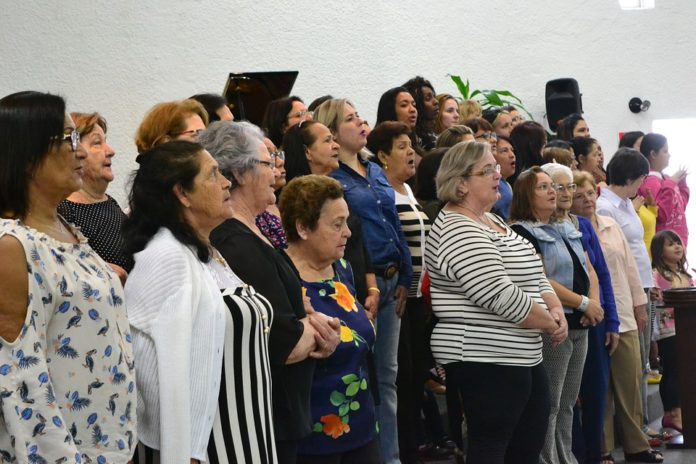 The Republic of Suriname on the northeastern coast of South America hosted the World Day of Prayer on March 2, 2018.

Christian women in Suriname prepared the service program and hymns for this year’s event using the theme “All God’s Creation is Very Good!”

The World Day of Prayer is celebrated annually on the first Friday of March in more than 170 countries.

The World Day of Prayer is celebrated annually on the first Friday of March in more than 170 countries. The initiative was created by Christian laywomen in 1812 and has a motto “Informed Prayer and Prayerful Action.” Women of all races, culture and tradition are welcome to observe the special day in prayer for justice and world peace, reports Eyre Peninsula Tribune.

Different ethnic groups live peacefully in Suriname. Women attended the day of prayer wearing the national costume of the countries where the various ethnic groups came from.

One woman wore a Cheongsam to represent Chinese immigrants in Suriname, while one wore a sari to represent Indian ancestors. Another Christian came wearing the traditional attire of the Arawak tribe who were the first inhabitants in the country.

Churches around the world joined the World Day of Prayer. Protecting the environment was the focus of this year’s event and the story of creation in Genesis was used in the programs.

In Saskatchewan, Canada, about 30 women and five men attended the service. One of the organizers, Sharon Heagy, said in an interview with the Assiniboia Times, “World Day of Prayer helps to expose local communities to what’s really happening in the world today.” She added that, the event “brings not just religious groups together in a common goal, but whole communities as well.”

A pastor in the town of Assiniboia said environmental problems are everyone’s problem, and not just for a selected few. Pastor Marilyn Leuty of St. Paul’s United Church urged Christians to do their part and be proactive to be “more faithful caretakers of Mother Earth.”

National sarad - October 7, 2020
Pastor John Hagee sowed seeds of faith on a trip to the Western Wall in Jerusalem that gave birth into a growing ministry that...

Movies Michael Foust - October 2, 2020
You may not smash your smartphone after watching Netflix’s newest hit documentary, but if you do, I won’t blame you. Titled The Social Dilemma (PG-13),...

National Beckie Lindsey - September 30, 2020
On Saturday, September 26, tens of thousands of people poured into the capital and the National Mall to attend the Prayer March led by...

Netflix’s ‘The Social Dilemma’ will make you want to smash your...

Designs for the New National Cathedral of Ghana Unveiled

Weighing In On Death of John Allen Chau