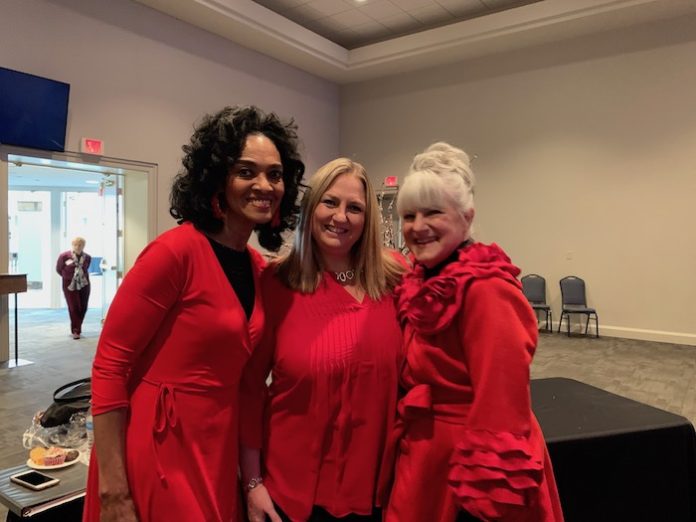 Last Thursday, Tampa Murphy and friends, Tiffany Beard and Marguerite Young led a joyful  time of music for the Encore ladies’ group at Christ Community Chapel (CCC) in Hudson. In the picture from the left are Marguerite, Tiffany, and Tampa. The music was a Valentine’s Day “love theme” treat for women in the fifty-plus age range. Some of the women stood and danced by their seats as Tampa and the girls sang a medley of love songs:

Stand By Your Man

Stop! In the Name of Love

Where Did Our Love Go?

Tampa re-worked the lyrics to How Sweet it Is, and they sang,

They ended the time of songs with How Deep the Father’s Love for Us.

Now in her sixties, Tampa Lann Murphy is a long journey from the days when she sang back-up vocals for the BeeGees “One For All World Tour” in 1989. Her late husband, Mike Murphy, joined the band in September-December of the same year. He also toured with the band, Chicago, as drummer/computer technician from 1984-1989.

Under the teaching of John MacArthur, Tampa and Mike came to faith in 1986, and Tampa’s spiky pink “touring hair” was replaced with a style of “less drama.” Life in California started to unravel when their home was devastated by the Northridge earthquake (January 1994). Tampa’s dad died six days after that horrendous event and her mom was debilitated by dementia. As Tampa says, “We just couldn’t move Mom to where the ground [under our feet] was still moving.” They came “home” to Ohio in February and served as caregivers for Tampa’s mom until she passed away in 2001.

After Mike died in 2006, Tampa continued in her role as worship and music coordinator for a few years and is now semi-retired. She remains a vibrant arranger, musician, and singer and is in demand for sit-ins with local bands. Her ministry includes helping lead worship at various area nursing homes, providing music at local memorial services, and joining congregation teams when needed. The Tampa Band plays secular gigs and during the Christmas season she leads “A Little Dickens,” an a cappella caroling quartet.

Tampa has a music room at home, and when she practices, she does so in view of her gold and platinum LPs that hang on the wall. Reflecting on her past, Tampa says, “My experience on the road with the BeeGees could not have been better. We stayed in five-star hotels, enjoyed first-class travel, and there was a family atmosphere with their wives, parents, children, kids’ tutors, and the brothers’ personal valets traveling with us. I was treated like a celebrity! My comfort and joy was traveling and performing with two other born-again Christians (this was before Mike joined me). It made for security and loving like-mindedness! Tampa added,”When the door of leading worship

was opened to me
with every experience
and skill now being
elevated and used to praise God,
that was when it became unimaginably awesome!”

The Encore Ladies group meets once a month from 1:00-3:00 at Christ Community Chapel. https://hudson.ccchapel.com/event/encore-ladies/all/

Eyes (and Hearts) on India from Northeast Ohio

National Beckie Lindsey - January 9, 2020
According to the Pew Research Center, one in five adults in the state are evangelical Christians, and there are more megachurches in California than in any other state

Movies Beckie Lindsey - December 9, 2019
The hit faith-based movie Overcomer has grossed more than $34 million and will release on DVD/Blue-Ray on December 17 in time for the holidays. The...

Poll Finds Nearly 50 Percent of Californians Say They Want to...