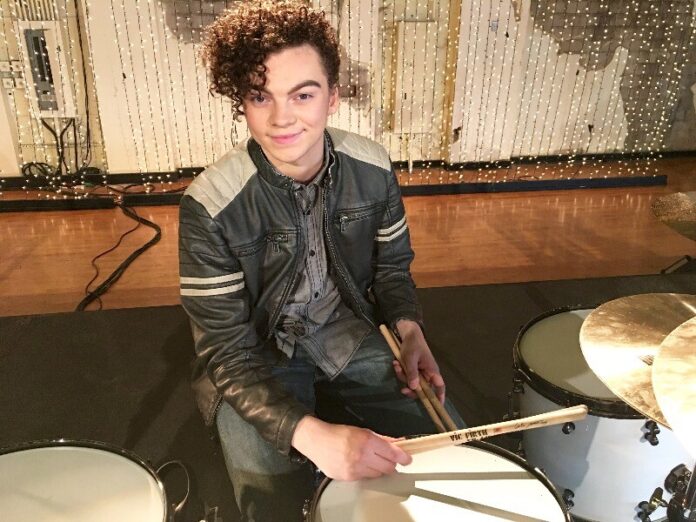 Actor and drummer Cole Marcus from the hit movie “I Can Only Imagine” has one main goal:

Now 21, Cole’s career started long before landing the co-starring role where he plays “Robby,” the drummer of the band MercyMe, alongside actors Dennis Quaid, Trace Adkins, and Cloris Leachman.

SoCal Voice is thrilled to bring our readers this exclusive interview with a true inspiration and role model.

Deemed a child prodigy, Cole has been a professional drummer since the age of four.

Blessed with natural rhythm, perfect pitch, and photographic memory, Cole began playing the drums before he could walk. He also taught himself to play the piano when he was only 7.

“Music has always been a reoccurring theme in my life. My parents have footage of me playing drums when I was only ten months old. My dad is a drummer. I saw the number one role model in my life playing and it became a natural thing for me.”

Cole’s career in music and film took off after being on the show “America’s Most Talented Kid,” winning his age category in 2003. Offers began pouring in from agents and producers. He did a lot of TV commercials, talk shows, and a few roles on Disney and HBO.

“It’s interesting to be twenty-one years old and look back on a seventeen-year career. I feel like I have all this knowledge and experience, yet at the same time, there’s so much that

I’ve yet to accomplish.”

As Cole’s acting career moved forward, his parents were cautious about the types of roles they allowed him to play, turning down most because they wanted to protect him from anything inappropriate.

“If there’s one thing my parents have taught me both spiritually and in life in general, it’s this: When you put your faith in God first, then what can tear you down? Anytime there’s been a setback for us as a family, it didn’t seem to faze them.”

As professional musicians themselves, Cole’s parents considered homeschooling a great option for their busy lifestyle. It has also given Cole time and freedom to write music.

“Although I didn’t have the typical school experience, it got me up close to things I want to stay away from and gave me a lot of headspace to think about the choices I want to make throughout my life. If God is at the forefront of your mind, he will make very clear the choices you should make. I stayed away from the whole party scene. But at the same time, I was surrounded by certain church kids making those choices.”

As Cole got older, the types of roles he was offered drastically changed. At 18, he received a call from his manager most actors would dream about, saying he had been given the main role in a big-budget movie, which doesn’t typically happen. Once he read the script, he saw how it didn’t match with his values and immediately declined.

“I’m a youth leader and pastor. This was not something that I wanted those kids to see. My rule is, if I don’t see Christ in it then there’s no reason for me to do it.”

Cole’s manager informed him he was giving up the opportunity of a lifetime. But Cole stuck to his decision and decided to walk away from the acting industry. However, God had a different plan.

The next day, he landed the co-starring role in “I Can Only Imagine” with his character description being “a kind-hearted, homeschooled, Christian drummer”.

“Now that’s the opportunity of a lifetime!”

Cole admits it wasn’t always easy during the filming process. He endured some heavy spiritual warfare, saying there was a point where he felt spiritually lost and weak.

“I never second-guessed my relationship with Christ, but I wasn’t as grounded as I am now.”

Due to the physical and mental stress, two months after filming, Cole came down with pneumonia and sepsis. He was hospitalized and told he’d come in just in time.

“I had no clue. I’d had a near scrape with death,” Cole said. “But it was just the reset that I needed. God gave me a second chance and I’m going to do everything I can to make sure I’m a good Christ follower by spending time with Him and being an example.”

Cole says his challenges have taught him that “God will use every setback as a setup to make a comeback.”

“My job right now is to take care of myself today so that I might be a better person tomorrow. It’s also to be diligent in the word of God. It may not seem like the most exciting answer,” Cole said. “But I honestly try not to plan too much. We’ll see what God has in store.”

A self-proclaimed visual and artistic individual, Cole says before he’s even fully awake, musical ideas flood his mind. But he admits, he must first get in the right frame of mind which starts with spending time with God.

“I look to promises that God has already made for me. I truly believe that if God is for me, who can be against me. But the most important one is to start off my day, and hopefully end my evening, in the word of God. If I don’t ground myself in the word of God, my life honestly is pointless. There’s no joy in it.”

“I’m working on a project which is still in development—one my whole life has been building up to. It’s something I truly can’t wait to unleash to the world.”

Cole says being a part of “I Can Only Imagine” has been tremendous in his life and faith.

“It was reassurance as a person that God is always in control. That he will open doors for me, and that my job is to make sure I’m in a good relationship with him,” Cole said. “Seek first the Kingdom of God and all these things will be added to you.”

Cole can be booked as a Guest Speaker/Performer at churches around the country at
cole@colemarcus.com or http://www.colemarcus.com

Movies Michael Foust - December 28, 2020
The phrase “family-friendly” -- as every parent knows -- is subjective. The film your neighbor says is fine for the children might not be so family-friendly in your home.

Movies Beckie Lindsey - December 15, 2020
Lead with love. A sweet and simple phrase—but not so easy to live out—particularly in high school. Actress Miya Horcher would know. She plays the...

National Joyce Dimaculangan - December 10, 2020
As the year comes to a close, YouVersion Bible App revealed the most popular Bible verse searched by its users.

North Point InsideOut Elevates to Next Level as Nationally-Renowned Band

Gloria Gaither encourages believers to ‘be the Church’