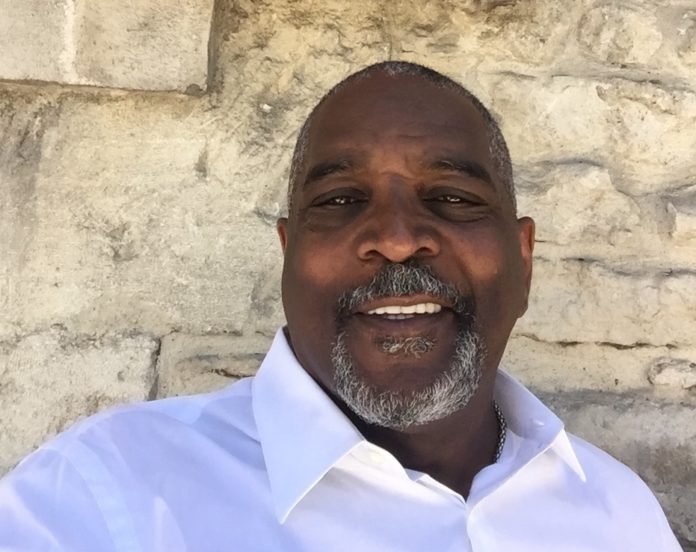 A man walks down the street and falls in a hole. The walls are so steep he can’t get out.

A doctor passes by and the man yells, “Hey, can you help me out?” The doctor writes a prescription, throws it down and goes away.

“A security guard comes along and the guy shouts up, “Sir, I’m down in this hole can you help me out?” The man writes out a citation, throws it down in the hole and moves on.

Then a friend walks by, “Hey, Jim, it’s me. Can you help me out?” And the friend jumps in the hole. Our man says, “Are you stupid? Now we’re both down here.”

Jim says, “Yeah, but I’ve been down here before and I know the way out.” 1

Pastor Marshall Brandon exemplifies the friend who’s been down in the hole before, something he never forgets. Marshall is a man who was saved by Jesus out of a life of addiction and all the evils it brings. He knows the life. He knows the mindset, and he knows the pitfalls of temporal highs.

Saved in 1977, Marshall’s life has been led by the Spirit ever since. His ministry has always included reaching those in prison, and more recently, those whose lives have been forever changed by addiction. After a meaningful ministry at a campus congregation in Akron, Marshall is now with Parkman Recovery Center in Warren, Ohio.

With Ohio claiming a top national spot in the opioid addiction epidemic, Marshall knows he was placed in this area for “such a time as this.” He is Parkman’s marketing representative and his duties include sharing the center with those who are unaware of it or building and enhancing relationships with people in the community who might want to use the facility.

Marshall loves telling people about the center, but his first love is the time he spends once a week as a spiritual group facilitator. Parkman is a secular institution, but in that group setting, which is an elective for the patients, Marshall can proclaim the Gospel. Group session attendance varies from 12-16 men and they are told it’s spiritual in nature. It’s rare that a man decides not to attend.

God has allowed Marshall to be part of many conversions to Christianity, a role he does not take lightly. While leading the group sessions, Marshall has seen thirty-two men make professions of faith!

In these days of “nickels and noses” ministries, Marshall has a different take, “What’s the cost of one life being saved? Since God is long-suffering and He does not want anyone to perish, I love that the angels rejoice in heaven when one sinner repents!” Marshall breaks into a clap and joyful laughter.

After he prays with each of the men who have made a commitment for the Lord, Marshall gives them a signed new beginner Bible inscribed with his signature, a verse, and directions on what to read first.

Marshall says, “Praise God for using me for the kingdom!”

Lisa Kibler is a multiple award-winning writer/blogger and international speaker. She has been published in Celebrate Gettysburg, CBN.com, Refresh Magazine, Almost an Author, Faith Beyond Fear, and is a contributor to Heart Renovation by Lighthouse Bible Studies. Lisa is a mentor for Word Weavers, Intl. and is president of the Kent, Ohio chapter. She is a member of the Jerry B. Jenkins Writers Guild, Your Novel Blueprint, and Tribe Writers. She has just completed Someplace To Be Somebody, the memoir of former black nationalist, Pastor Marshall Brandon. Lisa is represented by Hartline Literary Agency. Her website is https://www.lisakibler.com

Relief efforts for the Bahamas in Miami Dade

National Beckie Lindsey - January 9, 2020
According to the Pew Research Center, one in five adults in the state are evangelical Christians, and there are more megachurches in California than in any other state

Movies Beckie Lindsey - December 9, 2019
The hit faith-based movie Overcomer has grossed more than $34 million and will release on DVD/Blue-Ray on December 17 in time for the holidays. The...

Poll Finds Nearly 50 Percent of Californians Say They Want to...

Why a House Church?