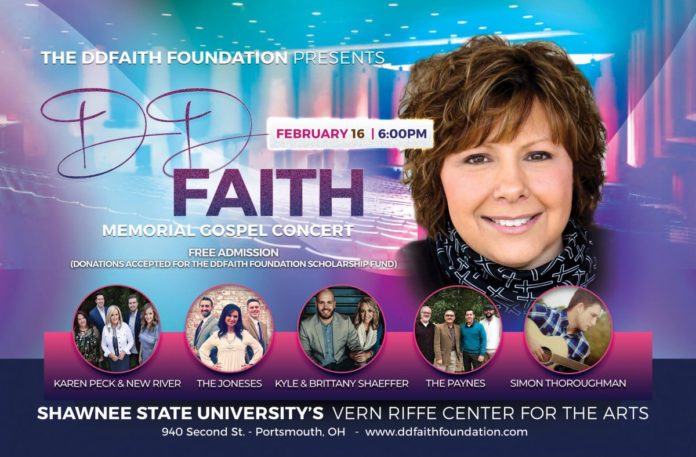 The DD Faith Memorial Gospel Concert is all set for this Saturday evening, February 16, at 6 p.m. at Shawnee State University’s Vern Riffe Center for the Arts. Admission is free, and donations will be accepted for the DDFaith Foundation Scholarship Fund. (Find out more about this fund at ddfaithfoundation.com.)

Karen Peck and New River will be back to headline this year’s concert for the third consecutive year. “We’re very honored to be returning, and we want to invite everyone to come out and be with us,” Karen Peck Gooch told us in a recent interview. “We’re honoring a beautiful lady who led a great legacy, and this event is able to help others going through similar situations. We’re very honored to be there and be a part. We feel like this one is going to be the best one ever!”

New River performs many dates throughout the year, but this one is special. “My husband, Rickey, was sick with cancer four years ago. It’s been quite a journey for us, but we just felt an instant bond with DeeDee’s family, and Brian Baer and Calvin Ray Evans are like family to us. When it came time for us to do a concert event honoring Dee Dee, we were very honored. I know if I had known her, I would have loved her.” (Read more about Dee Dee Duduit and the history of this concert HERE.)

Karen has been singing for Jesus since she was a child. “Mama would stand me in a chair, and I’ve loved singing my whole life,” she said. She was saved at age eight during Vacation Bible School. “I’ve always loved the Lord and had a desire to serve him.”

She studied piano for several years and began college as a piano major, later switching to education with a minor in music. But in 1980, everything changed. That’s when she took her first professional singing job with the legendary LeFevres. A year later, she joined the Rex Nelon Singers for the next decade, a time that she earned her first GMA Dove Award, as well as her first of 11 consecutive Singing News Fan Awards for Favorite Soprano.

In January 1991, Karen Peck & New River was formed when she teamed with her husband, Rickey, and her sister, Susan Peck Jackson, to form the group.  “I’m living proof of a hometown girl living her dream,” she said. “The Lord has blessed me more than I could ever have imagined in my life.”

Today, the group also includes Rickey and Karen’s son Matthew on guitar and their daughter Kari on vocals. Grant Gibson of Jasper, Alabama, joined them in the spring of 2018.

Over the years, the group has been honored with five Grammy Award nominations, as well as six Dove Awards from the Gospel Music Association. “We’ve been very blessed to be able to be out here,” Karen said. “The three of us have worked very hard—it’s an honor to stand by my sister every night and sing the gospel. We’re very supportive of each other. She’s a huge part of what we do.”

The year 2018 was one of the “best years we’ve had as New River,” Karen said as there has been “a lot of new territory.” In May 2018, she was inducted into the Gospel Music Hall of Fame. Matthew was married in June (to Preslee who manages their product table), and the group took several trips out of the country, including to Northern Ireland and Israel. “It was a year of change for us that was all in a good direction.”

Of the hundreds of songs Karen has sung during her career, she says “Four Days Late” is her favorite because she has seen the impact it has made on the industry and on the lives of so many people. “That’s why we do what we do—we want to make a difference,” she said. The song was named Song of the Decade for 2000-2010 by The Singing News Magazine and is one of the 18 Number One hits the group has enjoyed.

Many of the group’s hit releases have either been written or co-written by Karen, including “Pray Now,” “Gotta Be Saved,” “On The Banks Of The Promised Land,” “Daddy’s Home,” “I Am Blessed,” “I Wanna Know How It Feels,”  “Finish Well,” as well as “Hope For All Nations.” Their current single, “I Know I’ll Be There,” is #2 on the Southern Gospel charts, and Karen co-wrote this powerful song with Producer Wayne Haun and Dave Clark.

Which one is her favorite? She has trouble pinning it down. “They’re almost like my kids,” she said. “I’m so passionate about these songs.” But she admits her current top three are “I Am Blessed,” “Pray Now,” and “I Know I’ll Be There.”

What’s next for Karen Peck and New River? They are working on a new recording project this year, and they will travel to Alaska on a cruise with Bill and Gloria Gaither this July. In 2020, they will visit Israel with the Isaacs. They will be back again in Southern Ohio in May to perform at Spring Jubilee at the Scioto County Fairgrounds.

For more information about Karen Peck and New River and to view their busy schedule, visit online at karenpeckandnewriver.com.

Gloria Gaither encourages believers to ‘be the Church’

The Martins are Still Standing

Christian Actress in Broadway Musical Wicked: Q & A with Chelsea...