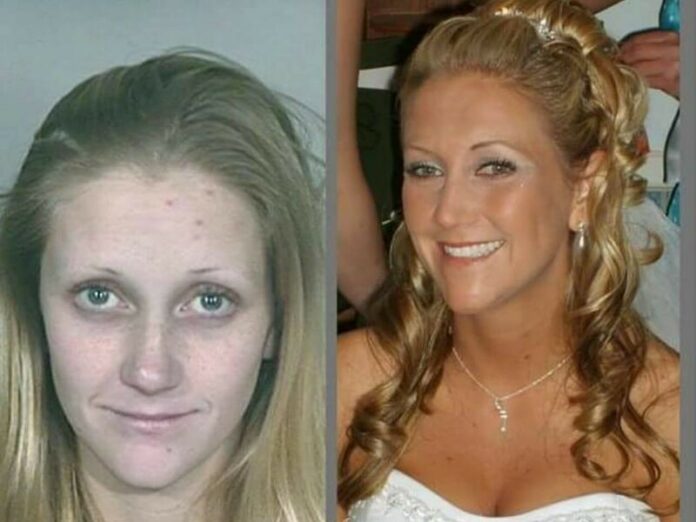 She grew up in the small town of Phelan, CA. raised by Christian parents Gary and Danielle Malkus. Her father was a deputy for the Sheriff’s Department and also became an assistant pastor, making church and faith a family priority. But unbeknownst to her parents, between the ages of seven and eight-years-old, Jacquie was sexually abused. In her young mind, Jacquie began to experience self-hatred and confusion about what was happening to her. In the process, she “hardened her heart toward God.”

By the time Jacquie entered middle school, she made the decision to move further from her family’s faith in God. She started to smoke cigarettes and dress in skimpy clothes. By high school, Jacquie was lying to her parents, attending parties with alcohol and drinking heavily.

“I couldn’t have just one drink. Because of my self-hatred that stemmed from the abuse, I wanted an escape,” said Jacquie. “I was trying to fill that hole, but it was causing me to become more depressed.”

Although Jacquie’s drinking was leading her down a path of destruction, her driven personality pushed her to maintain her grades and her secret. Her parents could tell something was wrong and took her to the doctor who put her on antidepressants.

“Satan is such a liar. He made me feel like the abuse was all my fault so, I never told anybody.”

“They didn’t know what had happened to me. They were just trying to figure out what was going on with their little girl. I’m sure they thought ‘we’ve raised her in the Lord. What could have gone wrong?’”

By her senior year, Jacquie quit playing sports and upped the drinking which intensified her self-deprecating thoughts until her depression led her to attempt suicide. Her parents immediately took Jacquie to Christian counseling where her secret of sexual abuse was finally brought into the light.

“Everything I’d been bottling up for years came out—I finally told my parents,” said Jacquie. “Satan is such a liar. He made me feel like the abuse was all my fault so, I never told anybody.”

At eighteen, Jacquie moved out to begin her own life. She stopped counseling and began working three jobs and taking energy pills to keep up. One night at a party, a guy offered her meth to replace her energy pills. Jacquie was hooked.

“It took me down a dark road to places I never thought I’d go.”

It didn’t take long for Jacquie’s addiction to escalate. She lost her jobs, her money, and her place to live. She moved from house to house of so-called friends. About a year into her homelessness, Jacquie’s parents reached out to her.

“I’m sure my parents were in a hopeless state. But they didn’t give up on me. As it says in Proverbs 22:6, “Train up a child in the way he should go, and when he is old he will not depart from it.”

“I’m sure my parents were in a hopeless state. But they didn’t give up on me. As it says in Proverbs 22:6, “Train up a child in the way he should go, and when he is old he will not depart from it.” Here was my dad a pastor and police officer and I was running around with these horrible people.”

Through some friends, Jacquie’s parents set up a job for her working at the YMCA in Colorado. They bought her a plane ticket and arranged a place for her to live.

“At this point, I was so skinny, my boyfriend had just gone to jail, and I had nowhere to go. So, I went.”

While in Colorado, Jacquie worked the job for a while and even tried to get things right with the Lord by attending church services offered by the YMCA. But she fell in with a group of people that liked to drink and eventually quit her job and started using meth again.

Jacquie’s new friends introduced her to members of the Mexican drug cartel where she would deliver drugs and help them take money across the border of Mexico.

One day there was a knock on the hotel door where she was staying. A detective pulled her aside and said, “What are you doing? You have a family that cares and is praying for you. You need to get out of here.”

“I’d like to say this is where I turn my life around. But instead, I got caught up with the wrong crowd again back in my hometown.”

Jacquie took the detective’s advice and headed back to California. Having a father in law enforcement protected her from the dangerous people she had fled from.

“I’d like to say this is where I turn my life around. But instead, I got caught up with the wrong crowd again back in my hometown.”

Now almost twenty-years-old, Jacquie eventually moved out of her parent’s home and in with a boyfriend who was heavily involved in drugs. Then one day the house was raided by police. Jacquie was arrested and ended up taking the rap. She was put in jail for possession and sales of Methamphetamines but was bailed out.

“It was the Lord’s hand. He was working in all of it. These were my dad’s friends who knew me. But if it wouldn’t have happened, I wouldn’t have come to my senses.”

A few weeks after she was bailed out of jail, Jacquie found a job with a boss who was a recovering drug addict and a Christian who would pray for her every morning. He began to share his story with her. Jacquie’s parents were also praying— as they had been for years. But this time Jacquie’s mother, Danielle knew it was time to “stop helping her daughter—let her little girl go— and allow God to bring Jacquie back.”

“I felt like all hope was lost. I was facing felony charges, was living in an apartment with no electricity, and I had no money. I remember going into my room and writing a prayer to God. I told him I knew He could save me. I still have the letter to this day.”

At this point, Jacquie’s father told her he had been praying for a year since he met a girl who had a story like his daughter’s but was set free with the help of an organization called Teen Challenge, a “network of Christian faith-based corporations intended to help teenagers, adults, and families with problems such as substance abuse or self-destructive behavior.”

Finally, at twenty-years-old, Jacquie was court ordered for a year-long program with Teen Challenge. But even then, Jacquie briefly left the program in search of drugs.

“God protected me that day. I met a girl who told me where I could find what I was looking for. But after hours of looking, I never found the place and went back home.”

Only two weeks after returning home, Jacquie was arrested yet again and sent back to Teen Challenge. This time was different. She remained in the program and recommitted herself to God. She clung to a passage from Scripture as she completed the full one-year program.

“Therefore, if anyone is in Christ, the new creation has come: The old has gone, the new is here!” 2 Corinthians 5:17

Once the year was up, Jacquie decided to stay and complete an intern program working in a woman’s home where she noticed a guy named Andrew who also worked there. He was a hard worker who loved the Lord. Because Teen Challenge does not allow dating, Jacquie waited until she completed the program and was in college to contact Andrew through another person who gave him Jacquie’s number.

Andrew threw away Jacquie’s number telling their mutual friend he was not ready for a relationship. He went off to ministry school with Teen Challenge and Jacquie went to Calvary Chapel Bible College.

Five years later after running into each other at various Teen Challenge events, Andrew finally asked Jacquie on a date.

“I was devastated when he threw my number away. But the Lord gave me the Scripture ‘A husband who finds a wife is a good thing and finds favor with the Lord.’ The Lord told me, ‘your husband will find you.’ And he did. I waited five years.”

Andrew and Jacquie were married nine months after their first date and have been married and serving the Lord together for over ten years. They have four children ages 9, 7, 4, and fifteen-months-old. Andrew works at Calvary Chapel in Apple Valley, CA as the Administrative Pastor with Jacquie’s father, Pastor Gary Malkus.

Jacquie, Andrew, and her parents enjoy sharing God’s story of grace and freedom from addiction. When Jacquie and her father returned to her hometown church in Phelan to give their testimony, five of the police officers who had arrested her when she was at her lowest were in attendance. By the end of her testimony, three of the officers stood to receive Christ. She uses every opportunity to minister and shares with others about what God has done in her life.

“God’s hand was always with me through everything. I had parents who were praying for me. I always tell parents to never give up praying for their kids. If you have kids still living in your home, make sure they attend church with you. Everything I learned from my parents and church came back to me in my darkest hour. Like it says in Isaiah 55:11 “It is the same with my word. I send it out, and it always produces fruit. It will accomplish all I want it to, and it will prosper everywhere I send it.”

Sports Del Duduit - May 31, 2020
Not too many people can say they are friends with a Major League Baseball batting champion. But Al Oliver and I know each other well.

National Guest - May 25, 2020
*This article originally appeared on Rachael M Colby's website TattooItOnYourHeart.com and on her Cape Cod Times blog by the same name. "I joined the military...

Opinion Guest - May 22, 2020
Much of the country is fed up with mandated quarantines. People are struggling with cabin fever and chomping at the bit to break out...

Yes, Virginia, There is a God